Blogging is all about connecting with people and continually making networks of folks who read and comment. Most blog tip sites constantly tell you to â€œuse Twitter or Facebookâ€ to reach the masses.

But the truth is a lot of bloggers hit the big time in their circle of contacts and think theyâ€™ve made it as big as they ever will get. Then they give up their dreams of glory because of all the work it takes, and the blog dies by a thousand little cuts.

The truth of this whole vicious cycle is that you begin to rot as a blogger when you hit the edge of your echo chamber. It is akin to the well-known â€˜plateauâ€™ of the constant dieter which after months of frustration becomes the new base for that extra 20 pound rebound.

â€œGlory is fleeting, but obscurity is forever.â€ â€“ NapolÃ©on Bonapart

For a lot of the self-published authors I know, the point of their site and their blog is to attract people to buy the books. Many come to me with the complaint that the circle of contacts they maintain has, in large part, reached its saturation point. And when that happens to an author, the sales drop dramatically.

Admitting You Have a Problem

It is a constant fight to dig out of the â€˜holeâ€™, and the only way that one can successfully even hope to achieve that is to realize you are stuck in an echo-chamber to begin with. So how do you do that?

Take this simple test and decide for yourself:

If you answered â€˜yesâ€™ to one of these, you need to seriously consider finding a new goal for your blog. You have reached the top ofâ€¦something.

When I first started blogging in 2001, I was a complete newbie. I thought that blogging would be no different than ranting about my latest peeve. And the site I chose to honor with my rants was Mindsay.com, mainly because my brother had begun blogging there. I blogged on and off for about 4 years and thought I was really something.

By the end of my time there, I had it down to an art in that I could consistently get voted into the dayâ€™s Top Ten blog posts. And boy was it sweet! Each and every day I would put up the same post with different names and slightly different topics, but the method behind building the post was the same. I had no idea I was acting as my own personal spinner. I was simply too much of a no0b.

After a short vacation and the mandatory hold on blogging that entailed, I came back to the site. It was then that I realized the same 10 folks were pushing me up on the list. In fact the average â€˜countâ€™ for votes was 1-2. The pond was so scarcely populated that my â€˜fameâ€™ was nothing more than a farce.

At that point, I closed my account, threw my hands in the air and walked.

Digging Out of the Hole

Sometimes the best way to get a hold of the downward spiral is to take a step back. Many bloggers are so busy fighting to maintain the status quo that they donâ€™t even realize they are just spinning their wheels. Taking a step back and trying to see your blog with fresh eyes can be a real, and often times, unpleasant awakening, just like Mindsay was for me. But it doesnâ€™t have to be the end.

Do research on a topic that is something youâ€™ve always avoided. In my case this started out as coding and WordPress. I got lucky and began to really understand this overflowing source of consternation.

Similarly, I found that posting about self-publishing how-toâ€™s seemed to really resonate with a lot of the less technically or business savvy authors who followed me. I even began contributing to some other blogs that centered mainly on Self-Publishing and the Publishing community.

Stop Putting Off A Product Launch

The WordPress blog posts became so popular in my â€˜pondâ€™ that people would corner me on Twitter for help. And then theyâ€™d start sending my contact information to their friends when the sites would crash. In fact, it got to the point that I started a Twitter chat [#Blog101] on Fridays so that I could do a question and answer session. Giving this kind of help, and meeting a real need, spiked my follower count hundreds higher than it had been before. But only because I left my comfort zone.

Out of all of the things I have learned as I progressed into advanced blogging, the hardest one to grasp was that success is simply being able to leave your echo chamber and get into the next larger sized pool. You will always be the little fish moving up the chain.

So what do you do if you are just truly mesmerized by the sirens song of being the â€˜big fishâ€™ in your little pond? It is always hard facing your â€˜successâ€™ and realizing it is ephemeral at best. But stagnation soon follows resting on your laurels. Cross the isthmus and jump into a bigger pond. The reason you havenâ€™t up until now is you were afraid.

And to a blogger, stagnation in an echo chamber is the touch of death. 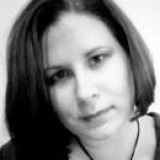 Allison is an author, blogger, and podcaster that puts out the Blog Allie podcast. She is also the Founding Editor of the Author Outbreak site for indie and self-published authors. Follow her @allisondduncan.